And so it begins: Claudia Llosa's run as the most decorated Peruvian director continues as Peru makes it for the first time to the Oscar ceremony. Up against films from Israel, Argentina, France and Germany, the real question is... will we get to hear Quechua in Los Angeles?

I can't say I didn't hope for this. The film did, after all, win the Berlin Film Festival. And the Peruvian Embassy and Consulate in the U.S. did a bang-up job promoting the film in Los Angeles.

Beverly Hills, CA (January 20, 2010) — Nine films will advance to the next round of voting in the Foreign Language Film category for the 82nd Academy Awards®. Sixty-five films had originally qualified in the category.

The films, listed in alphabetical order by country, are:

Unbelievable. It's not nominated yet (and in the pack are some strong films, including the Argentine, the Australian, the German and the French, the last of which I have seen) but it's so close. It would be Peru's first nomination. Fingers are crossed starting... now!
Posted by Middento at 1/20/2010 02:53:00 PM 4 comments:

Aughts, to be in pictures

Ten years ago on New Year's Eve, I remember working at this family restaurant in Pacific Grove, California, where my wife-of-less-than-a-year came specifically to bring me to the rocks by the beach so that we could watch the world end.

Remember, of course, that the end of the last decade was also the end of the millenium, and that this would cause all our computers to go back to 1900, and then we would all be plunged into the dark ages, and chaos and, well, yes. Prince had, after all, warned us that the end was then. So, in the immortal words of the Kitchens of Distinction, what happens now?

Lots of film folks are weighing in with their best-o'-the-aughts, none better in my opinion than Nick, who has a wildly and wonderfully eclectic list with morsels of information indicating why he likes them. Given that we had some free time coming home this last weekend whilst driving on the Delaware Turnpike Parking Lot, I mused upon what my own list would look like. Unlike any other film person writing right now, however, I cannot claim that I have seen a gargantuan number of movies this decade, what with the arrival of a job, a child, a book and tenure (in that order) over the last few years. (This is why I like Nick's list, since it provides a checklist of the most tantalizingly raised foie gras as well as the funkiest salted popcorn.) My own preference for certain kinds of movies therefore warps this list considerably; that there are fewer that come at the end of the decade is also no surprise, given that I have seen fewer films as the decade went on. Yet these, a baker's dozen, happen to be the movies that stick in my head, which is the greatest praise I can think of:
Posted by Middento at 12/29/2009 09:48:00 PM 7 comments:

The current state of the weirdness of our movie-viewing culture (where we watch things on cable, on demand, online, on Netflix, on, Donder! on, Blitzen!) has resulted in the downsizing of Blockbuster. This should surprise absolutely no one, given their gigantic expansion nearly everywhere and the subsequent squeezing out of nearly every locally owned video store. (My own local store, Video Americain, is a mini-chain of four stores, and wonderfully eccentric. When you want to get, say Desk Set, you wonder whether it is listed under "Classics," "Katherine Hepburn," "Comedies" or "Walter Lang." Inevitably, you have to ask one of the semi-snotty employees. I love this place.) I have no love for Blockbuster whatsoever, given that they inevitably never had anything I wanted. At the one located 10 minutes away from my in-laws' place on Cape Cod, an employee finally admitted to me that although they receive virtually everything, anything that had not been rented in three months went on the "Previously Viewed For Sale" rack.

Actually, this is the only reason I ever liked Blockbuster: because the stuff I wanted would rue of quickly go on sale in the discount rack. This was particularly true of anything subtitled. ("Sir, you do realize that this movie is subtitled." "Yes, that's why I want it. The other ten in the basket are also subtitled.")

So, I have to say that the wonderful thing about the mass Blockbuster closing has been the sale. And because I don't need a copy of The Hangover, I can get all sorts of cool stuff that everyone has passed over. This is particularly cool now that all DVDs have gone down to $3 per disc. And hey, for me, this is a tax deduction! (Seriously, I'll probably use several of these in class; I already showed Hedwig and the Angry Inch as the final exam in my course on the musical.)

I had already passed through the store in Langley Park, MD a few weeks ago and hope to swing by the College Park one before they close when I get back to the DC area; yesterday, I cleaned out the one here in North Falmouth.

I can't be the only film geek doing this, however. When Hollywood Video closed last fall near campus, I picked up all sorts of cool stuff, including the Criterion version of Overlord; in Langley Park, I nabbed a whole bunch of Spanish-language stuff like Cilantro y Perejil and Tésis. I'm curious to know what other folks have picked up -- so, in an effort of full disclosure, here is what I nabbed from North Falmouth (and if you want to know why, just ask -- and I will tell why):
(Note: I'd actually like to pick up a copy of some Tyler Perry movie, but they were out of Diary of a Mad Black Woman. Can anyone suggest a better Tyler Perry?)
Posted by Middento at 12/23/2009 04:11:00 PM 2 comments:

O, the slings and arrows of outrageous fortune!

This morning, Angela and I were awakened at around 5:30AM by, of all things, people screaming at each other. Perhaps if we lived in another neighborhood this would be something de rigeur, but in Takoma Park, it's a bit unusual. It is even more unusual that I woke up at all: I am known, after all, for having slept through bombs and four-year-olds crawling over my body. This must have been some fight.

After I discerned what was going on, I thought to myself, Who the heck is this? Our neighbors? No -- it's definitely a man and a woman fighting. The new folks across the way with the baby? No no, and besides, her parents are staying with them, so why would they be outside? The relatively new folks behind us? The semi-redneck next door? No, none of them, because the voices were too... too...

...young. Ah yes, the world of the young, when everything is overly dramatic and the world is going to end at any moment. Granted, there is clearly some infidelity going on here and, well, clearly some craziness is inspired, perhaps warranted. And goodness knows that when it comes to movies, I'm a total sap for over-the-top melodrama. To spar on a public street in quiet Takoma Park at 5:30 in the morning, however?

Hot off the press!

Back in 1998, I was floundering about for a dissertation topic when I took a graduate level French course on Cahiers du Cinéma with Carina Yervasi and was introduced to the concept of film journals. By this point, I had already learned a great deal about Latin American film history and, as a final project for this class, I decided to examine each and every page of Cahiers to look for material on Latin American film. This proved to be an arduous project -- but, oddly enough, also an exhilerating one, of sorts. (That paper is still in my electronic "trunk" of sorts, trying to burst its chains to try publication again. Quieto, quieto, soon, my friend...) I started looking for Latin American film journals written around the period of the 1960s and 70s, a high point of filmmaking from the region and discovered that the only one to survive the period of New Latin American Cinema from beginning to supposed end happened to come from Lima. 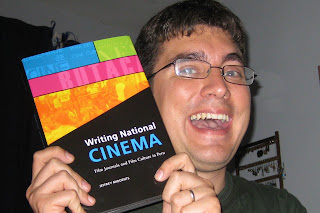 Eleven years later, you can finally really read what I learned. Behold: my book. Finally. I hold the first copy, before the go on sale for real at the end of the month (although Amazon has it available at a discount for pre-order now! I know, I hate Amazon -- but, hey, discount!). In this picture, you can also see the snazzy cover art. I have to say: UPNE definitely knows how to make a pretty book. They rock.

Eleven years. Given that I've already started the next project, here's hoping it's not another decade until the next one. Huzzah!
Posted by Middento at 6/08/2009 11:16:00 PM 7 comments:

Don't look back in anger 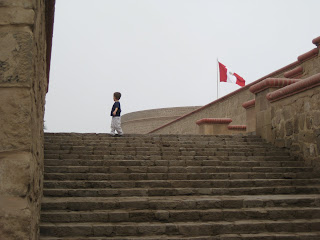 It has been quite a spring semester. Much teaching, a couple off-campus talks, a frazzled dash to the end of the semester and, oh yeah, tenure. The semester ended and the nuclear family rallied off to Lima for about 10 days, in between the spring and summer semesters, to meet the large extended part of the family residing down south.

If I blog lots about Peru over the next few days, it will undoubtedly be random and in fits and starts. Nonetheless, I figure I should do this. Peru is on my mind quite a bit now these days, and not just because I've been talking up Peruvian film (a presentation at the alma mater, where I also found out that the book will physically be done on Monday! whee!). The trip was the first time I have been "home" in about five years and Lima has changed in many significant ways.

A plus from the trip -- and, admittedly, a main goal -- was to get Xan interested in Peru in general. Given that he has a cousin who is only two months older than he is, this was an easy task. Now, all of a sudden, he isn't shutting out all the Spanish he is hearing, and has been mildly amused to find that folks speak the language not just in Peru. I'm not sure if we'll make like my parents and ship him off to South America when he turned 12 and surly (which is what happened to me), but who knows?
Posted by Middento at 5/31/2009 03:55:00 PM 2 comments:

From the beginning of this blog, the masthead has read "Musings on movies, fatherhood, the pre-tenure stresses, life in Takoma Park and other randomness."

The careful reader will observe that the masthead has now subtly been altered.

Because I am "pre-tenure" no more.

Thank you, thank you, un millón de gracias to everyone who has helped me through this.

Perhaps needless to say, I don't think my grading will be done by tomorrow.

...then let it be cinematically green! 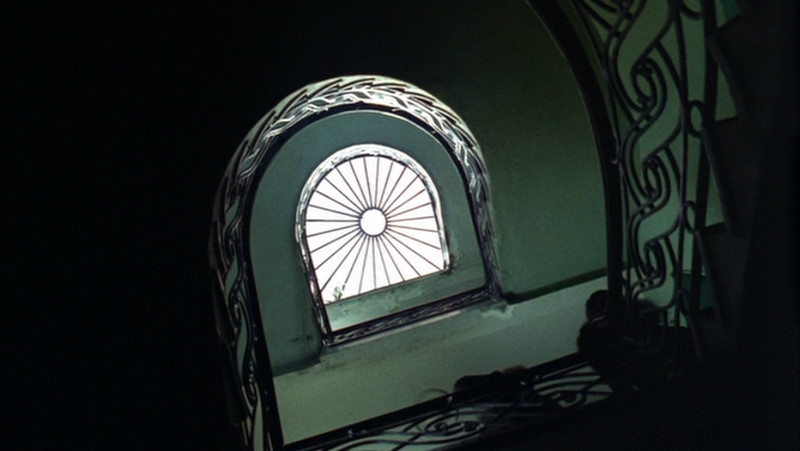 Sólo con tu pareja
(And check out the eyes in the banner, from Y tu mamá también, which I actually screened tonight to my class!)

Celebrating the two filmmakers I most associate with the color green: director Alfonso Cuarón and cinematographer Emmanuel Lubezki. Not even remotely Irish, just like me!
Posted by Middento at 3/18/2009 02:04:00 AM 1 comment: