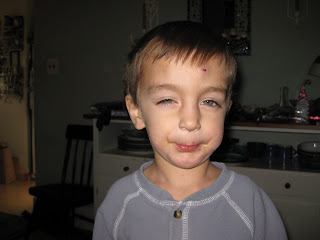 Guess why my son has this really nasty, gigantic bump on his head?

(A) He really wanted to be a unicorn for Christmas. Or a rhino.
(B) He was brained in the head by the school bully with a wooden car
(C) Voldemort stopped by, but messed up the scar.
(D) He had an encounter with the Przewalski's horse at Zoolights the other night.
(E) He is a klutz, falling down on a concrete step near the Capitol.

Despite (B) having actually happened earlier (see the other bump on his forehead, now almost healed) this time it's actually D. This confirms once again that he is, after all, my son.

The snow always shines on TV

Earlier this month as the holiday season came upon us, I was chatting with my dean about favorite holiday flicks; my head currently embroiled in Ernst Lubitsch films, I mentioned The Shop Around the Corner as a favorite. "For me," she said, "I love nothing better than the hokey wonderland that is White Christmas. I just love that film."

Her jaw dropped. Indeed, somehow I have never managed to catch Bing, Danny, Rosemary and Vera-Ellen do their post-WW2 tinsel-wrapped spectacle in any form (television, video or otherwise). I have no idea why I missed this, since I'm a sucker for everything that the movie stands for: musicals, Bing Crosby crooning, implausibly mild Vermont winters, etc. My dean (who is not a film expert, mind you) was genuinely upset that I had not seen this; within two days, a DVD copy that had been lying around her house appeared in my departmental mailbox. The end-of-semester grading mayhem quickly commenced, however, and I didn't get to watching it, despite her constant cajoling in the hallways, until a few days before Christmas, with my parents in town and a cold wind blowing outside.

Since I'm still ovewhelmed by holiday cooking, I'll say that my first response is that White Christmas is something like a meringue: a light, fluffy, pretty confection that isn't very filling. I was stunned to find that a drag routine done by two of the most popular jocks in my Peruvian high school was lifted verbatim from this movie (costumes and all!); I was less stunned to discover that Donald O'Connor was originally slated to do Danny Kaye's part, given its similarity to his role in Singin' in the Rain.

I decided to post about the movie after reading a holiday posting by Glenn Kenny on the film, mainly because one particular aspect piqued my professional curiosity and has stuck with me. The plot finds Bing Crosby and Danny Kaye up in Vermont at Christmastime, where their beloved general has fallen on hard time following the War while running an inn; to cheer him up, the boys decide to ask all the members of their infantry who live in New England to come to Vermont for a surprise. In order get them there quickly, however, Bing decides to go to New York and appear on the Ed Harrison television show (Harrison also being a fellow infantryman, coincidentally enough) to encourage them to come. Everyone watches this show, including the general (Kaye must fake a knee injury to get the general out of the room from where the television set is located) and Rosemary Clooney, who watches backstage from the nightclub act that she is doing in New York when she mistakenly thinks Bing is using the general's plight for cash. 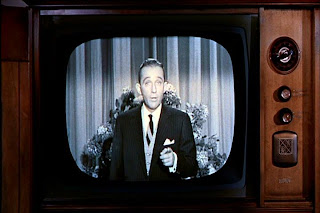 This use of television fascinates me and I want to investigate it more. For one thing, using television as part of the plot seems to run counter to the entire point of the movie in the first place, since the film was known and marketed at the time for being the first to be filmed in Vistavision, Paramount's entry into the widescreen market. From what I understand (and it's been a while since I've read Bolton's book on widescreen), this technological innovation was meant to combat the encroachment of television into the entertainment market. (Drive-in theaters and 3D also were technological innovations, but widescreen is the most interesting to me). It is therefore somewhat surprising for me to see a television screen within a wide theatrical screen. From an international perspective, this might have been the first time that some countries would have seen televisions and how they might be used; according to this, television didn't arrive in Peru until 1958, and this movie was released four years earlier and was undoubtedly screened there. So what was the general reaction to seeing television in this film? And what about in the United States? Why did Paramount choose to include the use of television as part of the plot, when the movie industry was trying to combat television? How many other movies in the 1950s did this? What kind of relationship between TV and movies existed for this?

Jingle bells all the way, man!

'Tis the season for all sorts of wonderment. Due to my potential jury duty (which so far hasn't actually occurred, yay), we stayed in the DC area this year and instead brought my parents here. This means that we've gotten to experience the holidays in DC for the first time. It's been a lot of fun to actually put up the tree and lights and actually enjoy them for Christmas. Santa will be coming down our chimney (which, come to think of it, may mean that we shouldn't start a fire in the fireplace tonight). We almost went to Michigan, which is currently overrun with bad weather, so this turned out to be great foresight on our part, even if Xan won't quite have a white Christmas. And we're having some good friends over for Christmas dinner whose families are otherwise far away (in Kazakhstan, Hong Kong and Michigan again), which may be accompanied by Stinkylulu's holiday soundtrack which he sent. (Should I play the "Festive" CD, or the "Filthy" one? Hm.)

For me, one of the funnier stories has to come from a couple weeks ago, when I had a bit of deja vu. Oma and Opa were due to arrive in a couple days and I was started to indicate to Xan that they would be arriving. "Are you excited that Oma and Opa are coming for Christmas?" I asked in the car.

I was a little taken aback. "Really? Why not?"

"I don't want Oma and Opa to come for Christmas," he said with finality. "I want Ruben and Gabriel and Liam to come for Christmas." These are three of his best friends at school, part of what I call The Gang. The first two are twins, the second is the sweetest kid ever.

All three, however, also happen to be Jewish. "Well, Xan, that's sweet, but they don't celebrate Christmas?"

"Because they celebrate Channukah." I knew he knew about that, because a parent had done a special thing at school about Channukah and he was therefore well-versed on dreidels and menorahs.

And suddenly, I was taken back about thirty years to when I started school myself, only to discover that all of my friends were Jewish as well. Growing up on Long Island, where everyone is either Roman Catholic or Jewish, I was a bit of the outcast as the Hispanic Protestant.

We have since gotten totally into Oma, Opa and Christmas (with all the songs, as you can see below, and the going to church), so we're dedinitely in the swing of things. And man, Santa is a great bribe to get a wayward child in line. What will I do tomorrow?